New policy recommendation published in collaboration with the Lab of Animal Communication from Ewha Woman’s University!

Amphibian diseases and invasive amphibian species are both generally introduced through the wildlife trade, either for human consumption or for the pet trade. However, adequate regulations can prevent such introductions.

In the Republic of Korea, the main known threats coming from invasive diseases are Batrachochytrids. While B. dendrobatidis is known to have a sub-lethal impact on local species, the impact of D. salamandrivorans is unknown. In addition, the proliferation of the invasive American bullfrog (Lithobates catesbeianus) has resulted in the extirpation of some local amphibian populations, the spread of diseases and there are multiple risks of invasion by other species.

The same risks and threats to the ecosystems arise from most amphibian species in the trade, some of which are already found in the wild. While regulations exist for the trade of wildlife in general, they are not directly addressing the amphibian trade, especially not newly traded species. Based on these variables and threats, we recommend a restriction to the amphibian trade in the Republic of Korea. 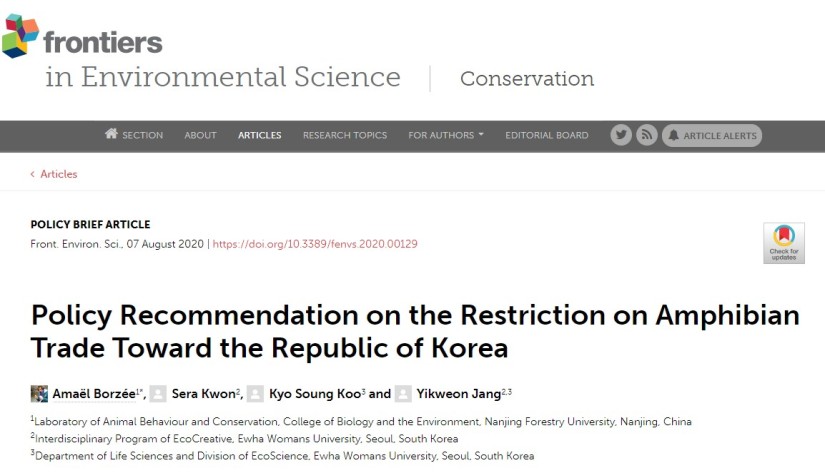 I’m leading the Laboratory of Animal Behaviour and Conservation at Nanjing Forestry University, where we focus on a broad range of species. Projects were so far focused on the behavioural ecology and conservation of amphibian species in East Asia, but this is changing and you are welcome to inquire, maintaining a focus on North East Asia. View all posts by Amaël Borzée

Laboratory of Animal Behaviour and Conservation

Laboratory of Animal Behaviour and Conservation